Typically, when we think of a parking garage, we think of the dark, multilevel towers found in most big cities. In various places around the world, architectural genius has been on display through creative parking garages. Here is a list of some of the world’s coolest garages.

Master architects in Stuttgart, Germany wanted to solve the problem of poor lighting in parking garages that made people feel vulnerable and scared to use them. In a great effort to incorporate more light and open spaces, it was made of sheets of glass and included a giant waterfall and creek. A peaceful parking palace that puts drivers at ease and is an engineering masterpiece.

Car Silos at the Autostadt

Volkswagen created an automotive-themed amusement park in Wolfsburg, Germany that doubles as a dealership. Customers can spend all day exploring the amusement park and then pick their car from a robotic silo. The giant glass silo, that looks like a beehive, has a giant arm that plucks the vehicle from it’s parking spot and delivers it to the customer, with a reading of 0 on the odometer! 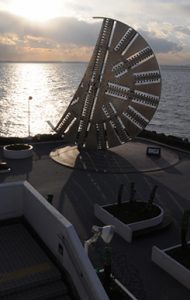 Detroit, Michigan is home to the Michigan Theatre, which was built on the very spot where Henry Ford built his first car and is adorned with 10-foot crystal chandeliers and cathedral columns. The adjacent buildings were built in such a manner that if the theatre was demolished, the buildings would be completely unstable. In 1976, the theatre shut its doors for good. Engineers were able to save the structure and original design and turn it into a three-floor parking garage.

Another German garage marvel is the Rheinauhafen Parking Tunnel. This underground parking tunnel is 2.5 miles long and has only three entrances. The magnificence of this parking garage is that it can withstand 37 feet of floodwater and runs along the Rhine river. The parking tunnel acts as a giant sandbag, protecting the city of Cologne, which has historically been flooded up to six feet.

In the spirit of true elaborate, Dubai is home to the world’s largest parking garage. From the outside, it appears to be a single-car residential garage. But, hidden inside is a vehicle storage facility that can hold 765 cars! A robotic garage lowers the vehicle parked in the “one-car garage” into the storage facility and then retrieves it upon the driver’s command.

Nutwood Parking Facility
This green parking garage at California State University is capable of housing 2,541 cars. What’s so cool about it? Three sides of the facility are covered with living bamboo and flowering vines that generate oxygen in an attempt to offset the carbon footprint of the garage and the vehicles it holds.

The classic parking garages are practical, but not always aesthetically pleasing. Architects and engineers around the world attempt to improve the safety and the look of parking garages, as well as reduce the amount of space they take. Some modern parking garages seem to be built from ideas plucked right out of a science-fiction movie. It will be interesting to see what the next generation of mass parking garages will be.